A Blog about Finding Peace of Mind - and Health and Happiness - in Daily Life with Young Living Essential Oils, Hands-On Healing and other Natural Things.

Don't tell anyone, but I'm not a huge fan of museums.

I've been to many. I appreciate what I see. And, sometimes, something will draw me in, like the 10-foot-high, 12th century Buddha at the RISD (Rhode Island School of Design) Museum in Providence, Rhode Island, my hometown, or "The Little Fourteen-Year-Old Dancer" by Edward Degas, on display in more than two dozen museums and galleries around the world.


I'm not sure what it is about museums exactly - too much at once or too many people, perhaps - but after about an hour, I've had enough.


The opposite is true when I see art outside. Then, I want to stay for hours.

You can find outdoor art in cities everywhere, even Syracuse. A giant, blue steel and wood sculpture "Walt the Loch Ness Monster" appeared in Armory Square a few years ago, created by Syracuse Public Artist in Residence Brendan Rose and nine students from Syracuse University's Industrial and Interaction Design program.


City art like "Walt" sure is fun, but my favorite place for sculpture is the little-known Stone Quarry Hill Art Park just outside Cazenovia, NY.

I discovered Stone Quarry about 10 years ago when it hosted an outdoor dance performance by Ailey II, a part of the Alvin Ailey Dance Foundation, under a giant tent. I took my daughters and we LOVED it.


That event was unusual for Stone Quarry. Except for its annual pottery fair, summer art camps for kids, the occasional wedding and so on, the park keeps quiet. Yet incredibly powerful. National Geographic ranked Stone Quarry one of the top ten Sculpture Parks and Trails.


Some so big you don't realize it's art, like the 900-foot-long "Third Iteration," made of recycled telephone poles. 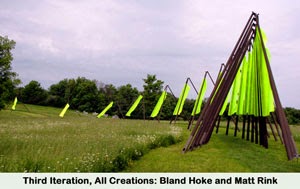 Leslie Eimas
I am dedicated to living a natural, healthy, peaceful, abundant life, and helping others do the same. I use only Young Living pure essential oils to create chemical-free homes and offices. I also offer Polarity Therapy and Light Therapy to enhance your health and wellness.